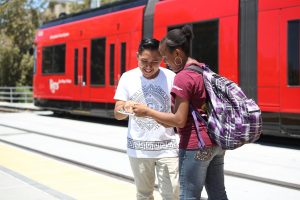 At the orientation for the Jacobs Center’s Youth Engaging Southeastern San Diego (YES) program, the coordinators introduced the program and explained what we would have to do if we got hired. That day, I was excited and confident. It was the first time I had ever attended a job orientation.

As the coordinators were explaining the duties, they mentioned there would be canvassing opportunities. At the time I was very timid and unsure of how to talk to strangers. So I was convinced: I was not going to go canvassing. After the orientation and interview, I received an email saying that I was hired for the position. I was very excited but still worried.

Most of my peers had canvassed with their team already; they mentioned that it was fairly easy, and they did not encounter any problems. We also had a guest speaker who said that we should not be disappointed if someone said no to us. He also gave us techniques, which motivated me. 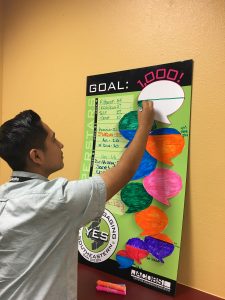 Miguel Molina colors in the YES student’s survey chart as they get closer to reaching their collective goal of obtaining 1,000 surveys.

While canvassing out in the community, we explained to the people what the Jacobs Center’s Town Center Master Plan was and asked if they wanted to give their input on the type of developments they would like to see in their community. Most of the people accepted and took the survey, but there were a few who did not. When people said no to me, it did not bring me down. In fact, it motivated me to knock on more doors.

This experience has helped me improve as a person. Before, I was hesitant to approach people, but now I am able to talk to anyone with ease all thanks to my YES program supervisors and peers who provided such an amazing work experience.