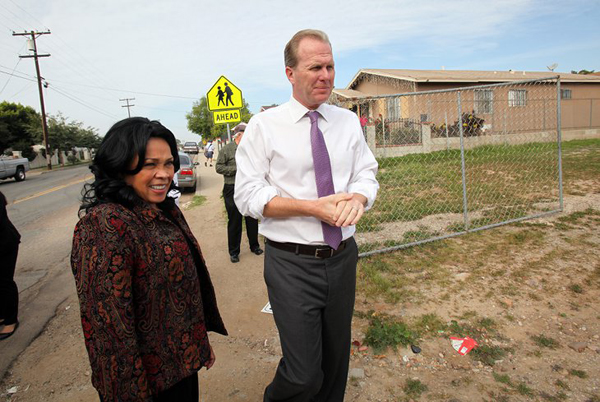 San Diego — A double-decker tour bus filled with developers and lenders got an up-close look on Thursday at 17 southeastern San Diego properties that city officials say are ripe for ambitious projects.

“Imagine the possibilities,” Councilwoman Myrtle Cole told roughly 80 people who participated in the 90-minute bus tour of her relatively low-income district. “This could be Gaslamp East.”

The tour was prompted by southeastern San Diego’s glaring lack of restaurants, retail shops, supermarkets and quality housing, and the area’s relatively large amount of land available for developers to help fill those voids.

Mayor Kevin Faulconer, who co-hosted the tour with Cole, said he’s optimistic that zoning changes, efforts by community leaders and the improving economy are about to come together and spur a wave of prosperity and development.

“This area is primed for opportunity — it is literally 7 to 8 minutes from downtown,” said Faulconer, adding that strong turnout for Thursday’s tour was encouraging. “We hoped to get maybe 40 folks and we’re at about 80.”

Leaders of the development community were also upbeat, but stressed that pending zoning changes to the area’s development blueprint — the Encanto Community Plan — will be crucial because they allow more dense projects.

“There’s a lot of exciting opportunities here, but the challenge is whether the zoning and the land use will mirror the vision that’s been set for it,” said Matt Adams, vice president of the Building Industry Association’s local chapter. “If I can’t sell it, rent it or lease it for more than it cost me to build it, then I’m not going to be able to move forward.”

Adams said Cole’s enthusiasm is one edge that southeastern San Diego has over other parts of the city, where dense development proposals often face community backlash.

“A passionate City Council representative is always important in land use,” he said.

“You never want to just build a project, you want to build a neighborhood,” said Harmer, whose developments have helped Little Italy, downtown San Diego and North Park blossom over the years. “Having three or four people all start at the same time will send a message to the lending community, citizens and government that there’s real progress.”

Crime and gangs have been mentioned as another potential hurdle for the area, but Harmer said developers are typically confident they can overcome such concerns.

Something that may help persuade developers and retail chains is the area’s demographic profile. While it’s relatively low-income, there is still about $1 billion in unmet demand in southeastern San Diego.

Data from the Nielson Group consultants shows that residents there spent $1.9 billion in 2014, but that only $890 million was spent within the area because the lack of stores and restaurants forces residents to shop elsewhere.

Cole, who’s lobbied for a Chik-Fil-A, Broken Yolk and Golden Corral in her district, said that needs to change.

“I don’t want just one restaurant, I want several restaurants where you can have your choice of what to eat,” she said.

Participants in the tour got slick brochures detailing the size, zoning and possibilities for each available parcel, and they also got a glossy map placing each site.

Mayor Faulconer urged the developers, architects and prospective tenants on the tour to explore any option they can imagine, promising the city would be open-minded and help expedite projects.

“You’re going to find willing partners at the city to get some creative things going on,” he said.